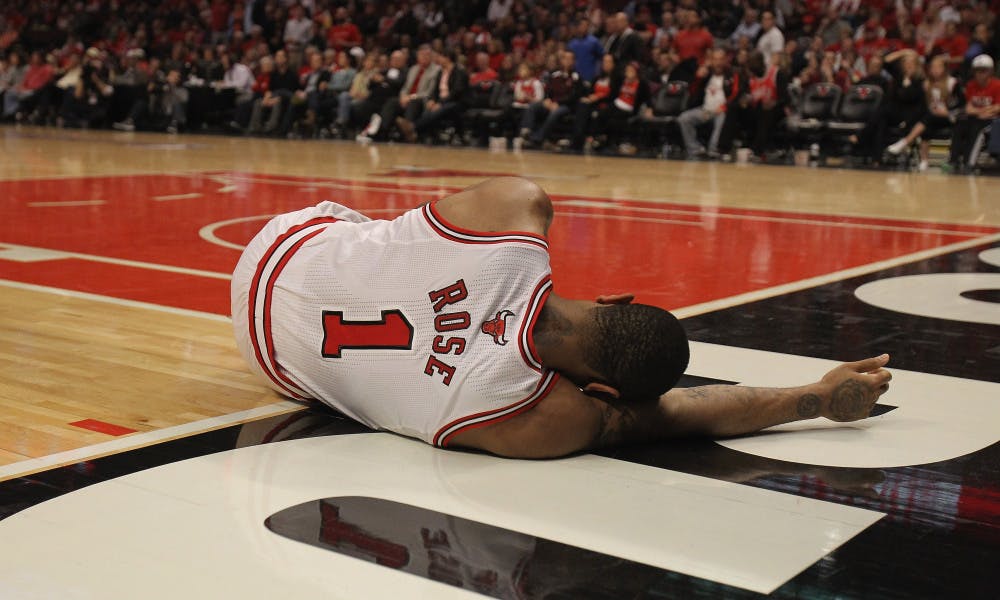 “What do I care if Derrick Rose ends his career?”

It was a long time ago, at some swanky dinner. I’m not sure who the guy was, but he was plugged in enough to dine with NBA heavy hitters—an entire front office and at least one deep-pocketed NBA team investor ringed the table. The talk focused on injury prevention. Rose was on his way to an MVP, and I was being critical of his coach, Tom Thibodeau, for grinding Rose to a pulp with too many minutes. (In general, the stars of that Bulls team—Joakim Noah, Luol Deng, Derrick Rose—aged badly.)

This guy (picture Kieran Culkin’s character from Succession) made the point that if the team worked Rose too hard and ended his brilliance early, it was no concern—the team would just get another one. This is too callous and indecent for my taste. It’s also a joke, in a salary-capped sport where 99.99999 percent of the world’s players never touch Rose’s level. The essential crisis of almost every NBA team is that you can’t get an MVP candidate for love, money, or tanking. Rose is still playing, but his time as an MVP-level player ended when he was still very young.

I’m in the Bay Area for Friday’s Silicon Valley Health and Performance Summit. It’s put on by Sparta Science, whose founder Phil Wagner, M.D., told me a while back that we have the scientific know-how right now to reduce NBA injuries 20-50 percent.

I relayed the Derrick Rose story to Dr. Wagner as we sat on black couches in the cavernous gym-as-warehouse which is Sparta’s high-tech workout-centric workspace. He’s crazy fit, his own employees marvel at his diet, his getting up at four a.m., and his ability to be totally focused for insanely long hours. The floor is NFL turf, the cameras and force plates are installed everywhere. The address is Menlo Park, almost literally in the shadow of Facebook. In the next room, rows of programmers and data scientists sit at laptops, looking like every other startup. The intelligence is natural and artificial.

Dr. Wagner’s reaction to my Rose story: “It’s shockingly not surprising,” he says. Sparta’s clients include all kinds of elite athletes: the Cavaliers, the Rockies, the NFL itself at the draft combine, and some unnamed branches of the military. Wagner has the team and tools at the ready to deploy sports science to reduce injuries, and is in meetings all the time with a who’s who of the sports world.

I asked Wagner what happens in a typical meeting when he pitches NBA teams. He says: “It doesn’t happen. They aren’t interested.” He’s simplifying a bit—the Cavs are clients. But he points out that to other clients Sparta’s insight is revered. “The ESPN cameras showed up to do their 30 clubs in 30 days,” he says, of a moment last season at the Colorado Rockies. “The GM said, you guys are welcome to go anywhere. Don't have your cameras anywhere near Sparta. It's the only thing you can't shoot.” There are academic studies about Sparta’s ability to predict and prevent injuries; the Rockies see it as their essential secret.

And he says the problem is cultural. A lot of people think like Kieran Culkin, and this Wagner finds problematic. Teams aren’t open to the insight. The powerbrokers are often too callous. Their other businesses don’t teach them that a business’s most precious resource can be a very limited number of surprisingly delicate bodies.

Meanwhile, the people charged with reducing injuries aren’t. “Unfortunately,” he says, “and I feel it's time to say this, I haven't been this polarizing before: Most strength and conditioning coaches, most medical trainers would rather be right than the athlete get better. And I've been hesitant to say that for three years, but considering it's been three years of knowing information like this and nothing's changed, it's, it's time to start calling people out.”

Wagner talks for a while about the magic of working with the military. With top-down chain of command, at least real change is possible. We are conditioned to do physicals annually. Wagner and his team do high-tech assessments of athletes designed to maximize performance and prevent injuries. They convinced military bosses it would be worth everyone’s time to re-assess every three or four weeks, instead of every 52. This was convenient for nobody, but once the bosses got the logic, the chain of command took care of the rest. It’s happening now.

NBA team politics are infinitely more complex, and as a result the best science is not being applied. In an era when science has great promise to reduce injuries, instead injuries are up. There are many reasons worth discussing—in many ways, that’s what is coming at Friday’s summit, from which TrueHoop will have updates.

Is there a team that’s Shangri-La of injury prevention? Wagner doesn’t hesitate: “The Spurs. They do a great job. And that's a credit to, you know, the head coach and the GM being curious and intelligent. They're always trying to learn why, rather than just an avoiding assumptions.”

Curious and intelligent doesn’t seem like too high a bar. Spurs CEO R.C. Buford will be one of the conference attendees. (No other NBA teams are on the list, but we’ll see who shows up.)

People say they were lucky to get Tim Duncan and Tony Parker. “They've been lucky like 17 years in a row or whatever,” says Wagner.

One of the most incredible decisions in NBA history was the managing of Manu Ginobili. Per minute, as a young player, he produced more or less like Michael Jordan. But he was injury prone—and so he played his entire career on severely restricted minutes. That he played to age 40 is one of the great victories of NBA decision-making history. The NBA doesn’t have many examples of this. “People want to just ride that weapon until it breaks,” says Wagner. “And then: next man up.”

If, instead, you can moderate a little, be curious and attuned to science, the reward can be title upon title.

I’d point out that the Spurs are distinguished in another way: they have an owner who leads the league in trusting his front office to make their own choices. Buford and Gregg Popovich get to be curious about learning as they go in part because they don’t think they’ll be fired the first time they have a bad month. They don’t often dine with people who wonder why anyone would care if an MVP ended his career early. Instead, they’re the team that turned an MVP candidate into a role player and saved his career. That might have been amazing for Derrick Rose.