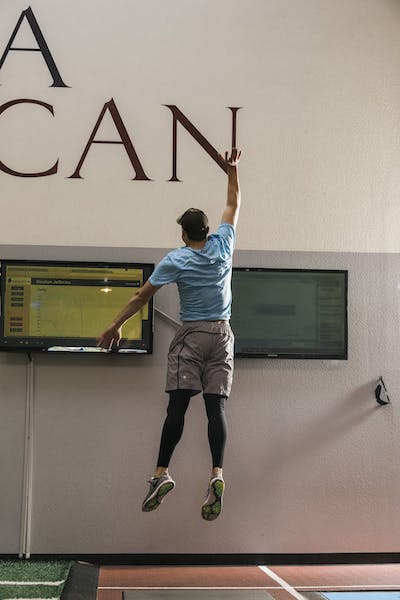 The vertical jump is one of the most fundamental athletic movements, and in turn one of the most widely tested. The simplicity of the movement itself means when basic jump tests are performed athletes will rarely be confused as most everyone has jumped before. But with any testing, uber-competitive athletes are going to attempt to cheat it for a better performance outcome. Whether that’s not touching a line, taking an extra step, or having questionable technique, athletes will find a way. (They even somehow find ways to cheat the scale and the measuring tape, judging by heights and weights on most rosters) But thanks to a little bit of technology and a little bit of physics, using the vertical jump as a test can be an “un-cheatable” assessment of athletic movement.

If Ya Ain’t Cheatin’ Ya Ain’t Tryin’

The popularity of a vertical jump assessment not only has familiarized athletes but the countless coaches who are tasked with measuring and recording this data. There are two primary tools currently in use: a Vertec type of system measuring based on how high an athletes reaches, and a jump mat type system which measures based on how long an athlete is in the air. While both of these systems can be useful, they can both challenges with reliability and validity, especially when it comes to our competitive athletes.

Whether consciously or not, athletes (and their neuromuscular systems) will often find amazing ways to cheat these systems. In reality by definition neither of these systems are actually measuring jump height, but using some less reliable and more “cheatable” metrics to estimate it. Coaches will even teach these tips and tricks to their athletes to help boost their performance in combine or testing situations. This is not because these people are dishonest, they are simply competitive! In some situations the results of these tests can have extremely significant consequences when large contracts are at stake!

How Do You Define Jump Height?

Almost seems like a stupid question, until you really stop to think about it… Is it the height between the athletes feet and the floor at their peak, what about the highest they can reach?

The actual definition of vertical jump height is the change in height or max displacement of the center of mass of an athlete when they jump. Instead of estimating jump height with a reach or flight time, force plates calculate the vertical displacement of an individual's center of mass using the measured kinetic (force production) data, the Impulse-Momentum Theorem, and the Law of the Conservation of Energy. While sounding extremely complicated the end result is a truly reliable and valid measure of an individual's performance.

While most of us have a simple understanding of the more basic physics concepts, when Impulse-Momentum Theorem gets brought up in conversation rarely are people familiar. Luckily, the impulse-momentum theorem is logically equivalent to the much more well known concept of Newton’s second law of motion (f=ma), it states: “the change in momentum of an object equals the impulse applied to it.” For our understanding it can be simplified to the formula:

Impulse (I) is defined as “the integral of a force over the time interval for which it acts.”  To simplify, it is a measure of the magnitudes of force applied and their duration. When a vertical jump test is performed on a force plate, these force variables are measured over time and impulse can easily be calculated within the software. The athletes mass (m) is constant, and (thanks to gravity) is also measured by the force plate. Using these two pieces we are able to solve for an athletes take off velocity (v), the speed they (their center of mass) are going at the time they leave the ground!

But I thought we were calculating jump height? What goes up, must come down. Since we have the velocity of individual going up, we know that the rate they will be 9.81 m/s2 due to the acceleration of gravity (g). Armed with this information, there must be a calculation to find the jump height, right?

Right. The above calculation can then be used, utilizing takeoff velocity we can calculate the true vertical jump height of an individual. This formula is derived from the Law of The Conservation of Energy which states that “the total mechanical energy in a system remains constant”.  That is, the total energy in the system (athlete jumping) will be the same as it at take off as it is at the athletes peak or max height of the jump. The kinetic energy at takeoff is derived from the kinetic (force) data, allowing us to calculate the potential energy at the peak of the jump, and in turn “solve for x” to find jump height. The athlete’s jump height is actually calculated before they even hit the ground, completely removing errors due to landing position. Thanks physics.

Utilizing cheaper solutions, accurately measuring jump height can be trickier than it seems. As always, you get what you pay for. Even when it comes to force platforms, the accuracy will largely be determined by the quality of the hardware itself. With the high amount of validity in jump testing across all sports, more and more coaches are performing them. There are countless types of jump tests and a growing list of algorithms using jump height as a factor (RSI perhaps the most popular), but without standardization and reliability across large enough data sets creating more meaningful value out of this data is impossible. If the goal is a purely quantitative measure like jump height, and high reliability isn’t a huge concern a simpler solution may be “good enough.” The true value of utilizing a force platform isn’t just a more accurate jump height, but an ability to objectively measure the quality of athletes force production patterns.

While some lower skill performance tests have shown some promise in predicting ability (with the vertical jump leading the charge) these purely quantitative values don’t allow us to understand HOW an athletes moves. Jump height may be an interesting piece of the puzzle, but looking at the forces produced during that jump will be able to tell us what movement solution the athlete is utilizing to get them from point A to point B. The more we understand about how an athlete moves the quicker we will be able to learn how an athlete should move.

Over years of collecting qualitative force data, we’ve seen different relationships of force production patterns for different types of athletes and different training histories. Different force variables are predictive of sport performance and injury outcomes as well. This qualitative data not only allows us to better understand differences between high and low performers or bulletproof and “injury-prone” athletes, but has also allowed us to validate different interventions on how to affect these different force qualities to improve our athletes resiliency.

These concepts are not specific to just this test, or this equipment. If attempting to measure athletic movement in any way, only measuring the quantity without considering the quality will likely leave your interpretation one dimensional, and not very actionable. When this one dimensional data collection is unreliable, it is even harder to use. If we are simply chasing a single performance metric at all costs, we are likely doing a disservice to our athletes. With time perhaps our biggest enemy, the best answer isn’t simply more tests, but better ones.