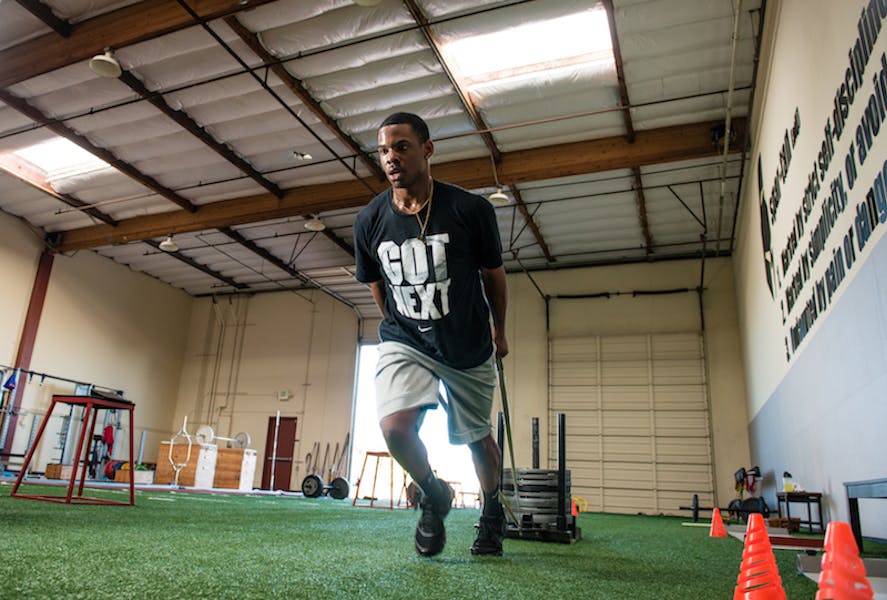 Once or twice a year, coaches get a chance to look back and reflect on their training program with the goal of evaluating its effectiveness. By consistently assessing and tracking this data, we are able to see what worked (to keep using) and what didn’t (to ditch). With the help of our Sparta partners, we are able to run this analysis on a much larger database to find what changes are statistically significant. Thousands of different athletes' training programs that were recorded using our Sparta Science Software platform were compared to the subsequent changes in the Scans, to see what movements most affected these variables.

We share these findings with our partners and using this data, continuously refine the program our coaches use at our Performance Training Facility. One of the biggest changes in our programming based on this data came with changing our needs with the intent of improving EXPLODE. By going against conventional wisdom and lifting weight LESS, we have been able to improve athletes’ ability to transfer force MORE.

The Movement Signature variable EXPLODE, is derived from the athlete’s average concentric force relative to the Sparta database. As an athlete transitions from the eccentric to concentric phase of a movement, their ability to maintain stiffness will determine their ability to transfer (or leak) force. Try using a wet noodle to drive a nail into a piece of wood as opposed to a hammer. No matter the amount of force applied, this lack of stiffness will not allow force to transfer to the nail.

Looking at trends within our database, we have seen athletes with high EXPLODE (relative to LOAD and DRIVE) are often athletes that excel in sports and positions that have to be very reactive and quick; for example basketball guards and football defensive backs. Athletes that play these positions with a lower EXPLODE often struggle to hold the positions needed to allow these forces to transfer during movements requiring quick transitions from eccentric to concentric.

Statistically, the most significant improvements in the EXPLODE variable from using the Deadlift. This has not changed. We have long praised the Deadlift for its ability to improve an athlete’s postural strength and ability to brace and in turn transfer force better.

By taking a holistic approach to training stimulus and following evidence, we made a dramatic change in our programming. We are now doing less strength movements and more speed movements with the intent of improving an athlete's concentric rate of force.

Athletes working to improve EXPLODE will now only do “traditional” strength training movements such as Deadlift once or twice a week. Other strength movements have been replaced with high velocity movements such as sled resisted marches and shuffles, sprints, bounds, and agility drills.

Deadlift allows us to teach the system how to brace, in a controlled closed skill. But to bridge the gap, high velocity movements that force the athlete to brace with the right timing have allowed us to improve the transfer.

The following athlete completed 6 rounds or weeks of training using the concepts discussed above. This athlete trained 3x a week, with the one major heavy strength movement (deadlift), only done once a week. The other movements assigned to this athlete's Plan to improve EXPLODE were 10 yard sprints, sled resisted shuffle, pro-agility (5-10-5), forward bounds, and an 8 foot slideboard skater exercise. By replacing traditional strength exercises with high velocity movements include acceleration and deceleration, we not only saw a dramatic increase in this athlete's EXPLODE (+6 t-scores), but an increase in LOAD (eccentric rate of force) as well. That is, not only is this athlete better able to TRANSFER force, their ability to CREATE force was dramatically improved even with only doing one heavy strength movement a week.