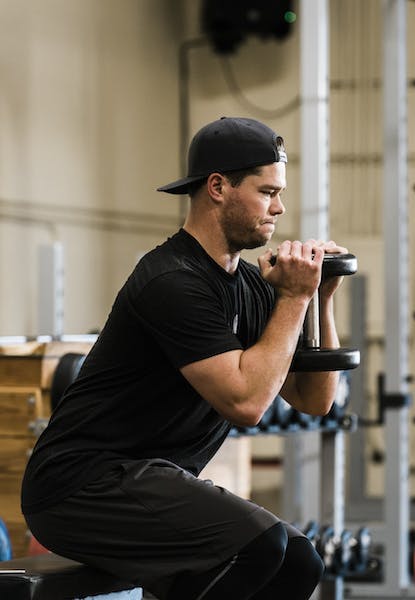 The most common compensation of pain, or any injury, amongst athletes, is momentum, and this strategy becomes even more pronounced as athletes become more experienced. Because as your sport mastery increases, the timing just becomes better. For example, players learn to throw at the right time, catch a ball by judging only its end position, and intermittent sports like soccer conserve energy by just moving only when necessary.

Such compensations make sense, if an athlete hurts, using energy to produce force for movement is just unappealing. The problem is this pain leads to weakness eventually, and even more concerning is this weakness will add to this cycle of pain. So instead, athletes start moving by inertia or momentum, gathering speed along the way, much like a falling tree. The problem is athletes have to get back up, so how can they avoid this trap of momentum? Avoid fatigue and get strong at the same time.

Momentum is not a Good Strategy

Impulse is the change of momentum, the product of force and the duration over which that force is exerted. We call impulse, DRIVE, because athletes maximize this variable when they prolong their force production by pushing longer. It is the unique variable of the movement signature because Force is not divided by time like LOAD and EXPLODE.

A greater movement duration, more time on the ground, can make impulse greater, however, too long can lower the other variables by negatively affecting the stretch-shortening cycle. The SSC is the physiological mechanism evaluated in the signature and a major process underlying every athletic movement.

So we look at the movement signature as a whole; DRIVE in relation to LOAD and EXPLODE. If those first 2 variables are low, and DRIVE remains high, the athlete is moving predominantly by momentum, swinging their way into a movement solution rather than pushing into the ground.

Pain and weakness are the major symptoms for the extreme drive signature. Often times we see basketball players display this movement signature after a long career of knee pain. Rather than bend at the knees to LOAD, or even brace with EXPLODE, the athlete swings the upper body backwards in order to move up or forward.

One of the easiest coaching observations is an excessive use of the arms to initiate the movement, rather than the lower body. This swing is followed by an equal over-reliance on the upper body to finish and prolong force production, often times a technique found in volleyball players. This compensation is further worsened by taller athletes, using these larger torques to build momentum.

If pain or this momentum is not present, the simple identification is always just weakness and/or hypermobility. We often see Asians or females display this signature due to greater genetic ligament laxity. This is laxity is pronounced further during the menstrual cycle.

The Risks of Extreme Drive

If pain or weakness inhibits the SSC and muscular function, stress is placed on the other soft tissue structures; ligaments and bones. Which ligaments at risk depend on the particular lower variable, both of which are low in extreme drive.

So, extreme DRIVE athletes have a combined risk of ligament/bone injuries at the knee and trunk. Since changing body segment length is unavailable, muscle strength and the elimination of pain are the two keys for Extreme DRIVE. Those goals cannot separate to break the cycle of weakness and discomfort as even performing bodyweight movements to coordinate the right sequencing can help restore and remind the body how to move using more muscular tension.

The 1 Leg Squat is a great example of how to restore LOAD because of the minimal external resistance and increased requirement of controlling momentum, not using it. Upper body movements, when performed correctly, can also really encourage trunk stiffness and control. This leads to less momentum and more use of the lower body.

The Big 3 for Extreme Drives...