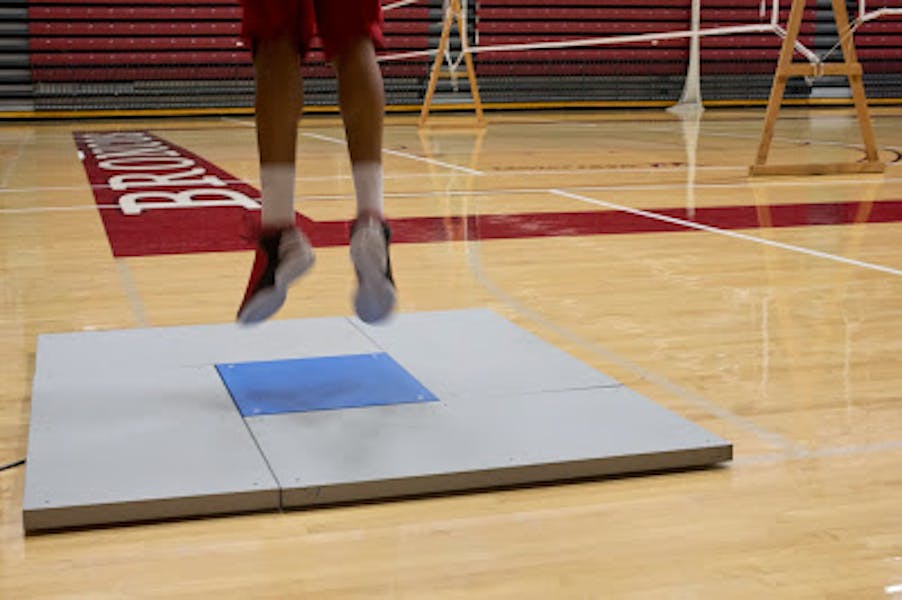 Even on ice, the interaction with the ground determines performance, injury, or in Herb Brooks's case, fitness. One of the only exceptions for the need of ground interaction is water polo, because even other aquatic sports, like swimming, depend on the start and turns to dictate outcome.

This interaction, ground reaction force (GRF), highlights the need for athletes to develop the right sequence, or Movement Signature, as opposed to just muscle groups or body parts. Perhaps the best example is the connection between upper body injuries and force dynamics of the lower body, or other "downstream" regions.

Weak signatures were defined previously when only one value is drastically lower than the other two. In the example shown above, LOAD is significantly less than EXPLODE and DRIVE, creating a situation where the lower body stiffness is not sufficiently developed.

Stiffness is actually important in the biomechanical sense, though often associated with only negative connotations due the incorrect implication of less flexibility. For example, during running when an athlete’s foot contacts the ground, a spring (leg) is compressed and pushes back with a force proportional to the distance of compression. This amount of force, divided by the compression distance, is stiffness. As you can see, stiffness is a good thing, allowing the leg to return momentum back to the body to avoid losing energy, to be more efficient, and more explosive.

The primary determinant of leg stiffness occurs at the ankle joint. In fact, leg stiffness is relatively unchanged by the alterations of hip and knee stiffness, because these larger structures work at a higher level, leaving the least stiff spring (ankle) to have the greatest overall effect.

How do you lose Stiffness?

Weak signatures are undesirable because of inefficiency; in this case the weak load causes a loss of stiffness. Such findings occur often from knee pain. There is an initial inhibitory response; my knee hurts so I will not be very aggressive bending it. This acute situation is generally followed by a more cyclical response. Knee pain results from a lack of eccentric strength which then causes an inhibitory response, further decreasing eccentric strength. Pain leads to more pain - it is a vicious cycle...

Some sports just do not require large amounts of stiffness or ankle joint usage. For example, other than catchers in a squat stance, baseball players are not exposed to deep ankle flexion/bending as their major movements are standing and rotation. Whether by self-selection or an adaptation over time, the lack of calf and quad musculature speaks to a greater hip and trunk stimulus. This is just a nice way of saying baseball guys have no lower legs.

From a performance standpoint, this initial force generation, LOAD, flows into EXPLODE, the variables are highly correlated. This relationship makes sense due to the stretch shortening cycle (SSC), and the nature of dynamic movement. More energy developed initially allows for more energy to be stored and used later on in the sequence.

This same concept can explain an increased risk for injury because if no energy is built initially in the muscles of the lower body, other structures become at risk. Tension might be incorrectly initiated in trunk musculature (obliques) or upper body, rather than developed from lower leg. A more specific example we see is between low LOAD, sprint mechanics, and distal hamstring strains. Athletes with low LOAD tend to pull their leg through (i.e. reach and butt kick), rather than drive into the ground.

Squat is a great prescription for low LOAD because of the demand for ankle ROM and stiffness that is created through emphasis on the eccentric phase. If only the load is low, 1 leg squat is also recommended because of its focus on the quad and ankle over the global effects of bilateral squatting on the trunk and hips (explode). Knots and pain can have a negative affect on LOAD, so focusing regeneration efforts on the quadriceps has a huge impact on the initiation of force.