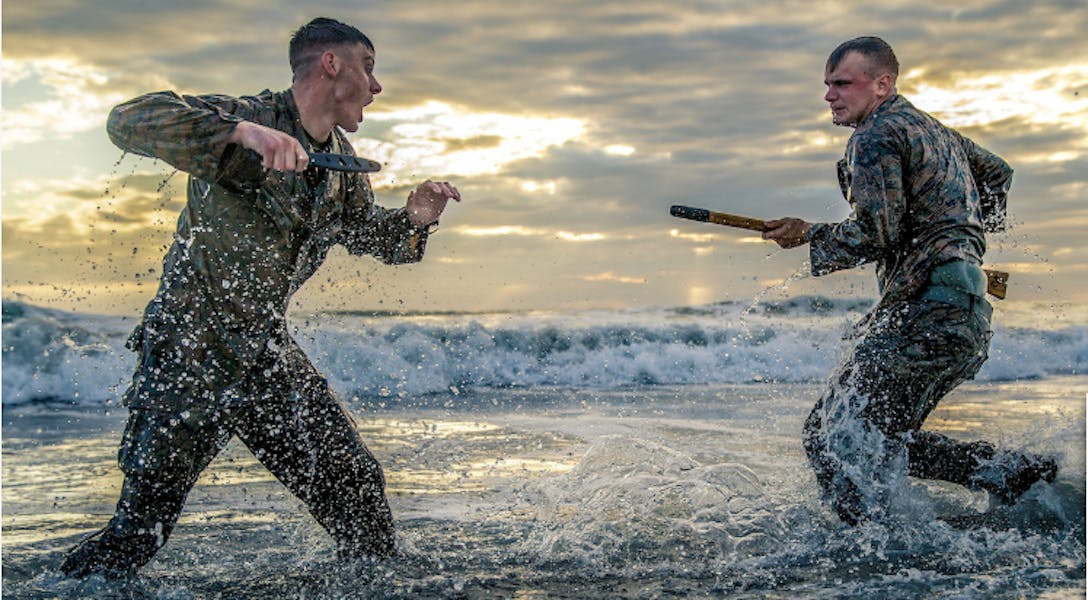 It's raining on a Tuesday morning — pretty standard for a Marine physical fitness test — and I know that rain or shine; pull-ups, sit-ups, and a three-mile run are going to happen. I stand, shivering in the pre-dawn drizzle, listening for the sergeant to call me forward. I'm at an about face waiting for my buddy to finish his set of pull-ups. 21... 22... 23... he just hit a perfect score. It's my turn now. I stretch my arms and take a deep breath.

"Next," the sergeant calls.

I mount the bar and wait for the signal to start. This isn't my first PT test, which is a blessing and a curse. I know exactly the number of pull-ups that I need to crank out, but after three deployments, I have no idea how my body is going to respond. I prepare myself for a battle. I start to pull and pull harder. I breathe slow and deep, but then my shoulder pops, an injury left over from my years as a high school pitcher. I gut through the pain to the end. 21... 22... 23... I finish the test with a perfect score, but the pain in my arm will take weeks to heal. I'm qualified by Marines standards but my injury makes me feel anything but ready for war.

Just like the legendary King Leonidas and his 300, today's warriors require strict physical training and discipline to make sure they are ready for any battle. Readiness is exactly the problem that Army Major General (Ret.) "Spider" Marks and his team at Sparta Science are trying to fix. In fact, my PFT injury is much more common than I thought. The Marine Corps estimates that musculoskeletal injuries cost 365,000 lost duty days and $111 million annually.

To help Marines increase their readiness for war, the Marine Corps is turning to some 21st century technology. General Marks is no stranger to hard problems and out-of-the-box thinking. He cut his teeth as an Airborne Ranger and the senior intelligence officer in Iraq. General Marks told We Are The Mighty,

"Every Marine has his or her strengths and weaknesses but we all have to complete the mission. Sparta Science helps to identify those individual weaknesses and provide a training program to make sure you are ready to fight on any mission." - Army Major General (Ret.) "Spider" Marks, Board of Advisors for Sparta Science

Sparta Science is the brainchild of Dr. Phil Wagner, a strength coach and former Rugby player who asked himself a simple question, "Can we use technology to increase performance and prevent injuries before they happen?" Dr. Wagner believed the answer not only to be a resounding "yes" but he believed he could also identify potential injuries in a matter of seconds. He's developed the Sparta System, which first uses a movement assessment (Balance, Plank, Jump) to capture a personalized body scan. The scan is then compared against over a million other assessments and with AI technology, the system can identify areas prone to injury and prescribe personalized training programs to correct weaknesses.

The Sparta System is already being deployed among college athletes and even professionals in the NFL, MLB, NHL, and NBA to outstanding results. Not only is the system helping athletes achieve their peak physical performance but it's also helping prevent injuries that can cost players/teams millions of dollars in medical expenses. General Marks and the Sparta team believe their system can also help military leaders all the way from the top brass to the NCOs on the ground to better leader and prepare their troops for war.

Imagine that within minutes of completing a Sparta Assessment, your NCO or Platoon leader could have a chart showing your overall readiness score — and any injury risks to your feet, knees, or back. It's this level of detail that General Marks expects will change the game in military readiness.

"By having access to this kind of information, military leaders can make smarter choices about how to train for war and employ those soldiers once they get there. The Sparta System makes us fight better."

As this new system continues to be used among various military units, we should expect the ancient Spartan ethos of "the more you train in peace the less you bleed in war" to still apply. However, we can also avoid some preventable risks, like popping shoulders during a PFT.