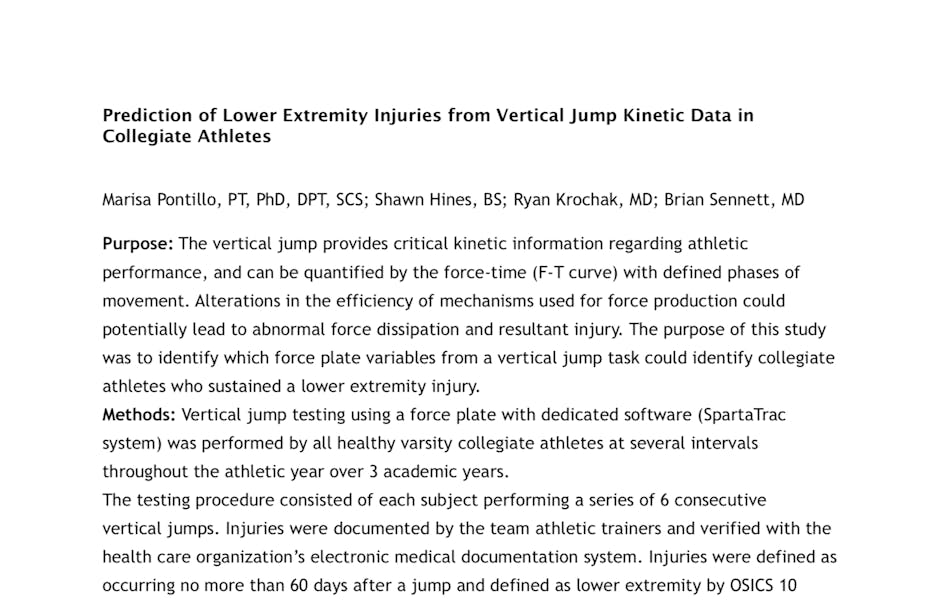 The testing procedure consisted of each subject performing a series of 6 consecutive vertical jumps (Sparta Jump Scan). Injuries were documented by the team athletic trainers and verified with the health care organization’s electronic medical documentation system.

Vertical jump variables used were Load, Explode and Drive, operationally defined as the average eccentric rate of force development, average concentric force, and concentric impulse, respectively. Logistic regression was used to determine if the battery of variables could predict whether or not an athlete would sustain a lower extremity injury. Additionally, athletes who sustained an ACL injury were identified, matched, and analyzed correspondingly.

Key takeaway: Clinicians, athletic training and coaching personnel can rely on the Sparta AI Force System and injury database for predictive analytics for lower extremity injuries, including ACL injuries, using the Jump Scan assessment. The Jump Scan takes less than 60 seconds to perform and produces an instant and actionable 'injury risk report' for the practitioner with prescriptive plans for exercises to help the athlete proactively minimize their risk of injury.

Interested in collaborating on data or seeing how Sparta can help your organization minimize injuries proactively? Let's connect to put Sparta's AI and injury data to work for you and your athletes.