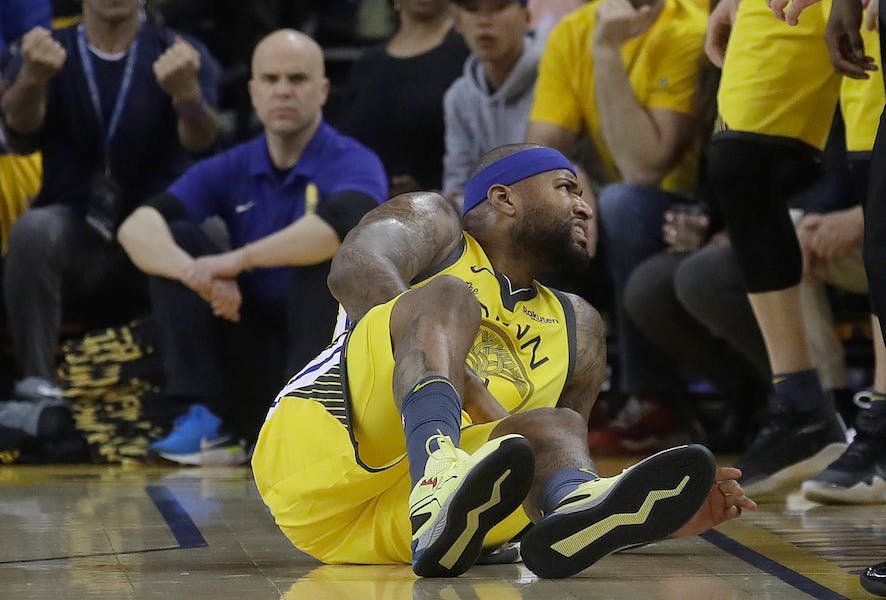 August 15th 2019: DeMarcus Cousins battled back from the misery of a torn Achilles and then a torn quad to take the court for the Warriors in June’s Finals. After knocking around the league—Kings, Pelicans, Warriors—he had a chance to finally settle into his long-term home alongside LeBron James, as a Laker. (Once upon a time, LeBron was a regular hanging around DeMarcus’s outstanding Kentucky team. They go way back.)

But now Cousins reportedly has yet another major injury, and presumably there’ll be an urge to blame somebody. I nominate just about everyone who has had any say over managing the best players in the game—their work commitments, their schedules, their rest, their training programs, the way science has been integrated into their programs—over the last half-decade. Whatever they’re doing is not working.

Five years ago Paul George shattered his leg in a Team USA scrimmage in Las Vegas. The footage is said to be among the NBA’s most gruesome—I’ve never been able to bring myself to watch it. However, I did recently watch a documentary about that summer called Kevin Durant: The Offseason. It’s on YouTube.

“When you see something so gruesome like that so close in front of you, man, of course you’re going to think man, this could happen to me,” says Durant, as we see footage of him flying away, through a dark and stormy night in a private jet. Soon we seen Durant taking a phone call from then-Team USA Coach Mike Krzyzewski, explaining that he’s quitting Team USA to take care of his body and prepare for the upcoming NBA season. “My next step is going to be delicate,” he tells the camera. “I’m going to be careful.” It’s hardly a high point of national pride and sacrifice, but it’s totally understandable that Durant would not want to go with the flow.

The fact of the matter is that the powers that be simply are not doing a great job preventing injuries. They have not earned trust in considering players’ health. ESPN’s Baxter Holmes recently wrote an incredible series about how youth basketball is creating “ticking time bombs” of injury risk. It’s not something the NBA has figured out, either.

In the video of that terrible day five years ago, look who else was on the court. DeMarcus Cousins was right there. Klay Thompson. Gordon Hayward. Derrick Rose. Chandler Parsons. And on and on, more and more names who have also had profound injuries since then. TrueHoop’s Dillon Shain went through the records of the 19 players on Team USA at that moment; whatever they did to avoid similar fates has failed. Of those 19, only five—Andre Drummond, Kenneth Faried, Kyle Korver, James Harden, and Damian Lillard—have gone five years without a major injury.

Durant flew home that summer, away from Team USA. But mere weeks later, he kicked off a season of nightmarish right foot troubles that required three different surgeries. In this year’s Finals, of course, he tore his right Achilles and who knows when he will play again?

The right approach is not the same as the old approach.

What’s maddening is that over these same five years, there has been a revolution in understanding injury prevention. What once seemed like snake oil is now, in real peer-reviewed studies, emerging as reality.

The trick is to manage the integration of this science into NBA decision-making in a smart way. It’s not as simple as contracting with a vendor to bring science into your decision-making, or hiring a director of sports science. It takes a talented, forward-thinking manager to identify the right vendors, ask the right questions, and build organizational support for well-conceived new systems.

Phil Wagner, M.D. is the founder of Sparta Science, a Silicon Valley startup dedicated to using evidence to prevent injuries. Clients range from the armed forces to the NFL. Former NBA commissioner David Stern is among Sparta’s investors. The good news, Wagner says, is that implementing evidence-based injury prevention systems has the potential to reduce injuries 30-50 percent.

How soon might that happen in a major American sports league?

That’s when Wagner laughs. There are obstacles beyond science.

“We are getting closer,” he says, “as some of the game’s larger names continue getting injured. The NBA might be the closest, after the national spectacle of the Finals when it was just so clear that wow, even the best players are not superhuman. Basketball will be the first, because the NBA tends to be innovative.”

On the phone today, Wagner says the NBA has already done a lot. “Right now there is, already, a league-wide injury surveillance system. And there are Second Spectrum in-game stats about how everyone is moving.” Second Spectrum uses cameras mounted in the ceiling of every NBA arena to generate some of the most specific and powerful statistics in the history of the planet. Assessing how fast everyone is running, for instance, is a cinch.

What’s missing, Wagner says, is “some kind of movement diagnostic to triangulate the three.” There are now sophisticated ways to assess how an athlete is moving today, compared to other days. Force plates, jumping off boxes, careful workouts in front of high-tech cameras let computers model the forces working on an athlete’s joints. In 2006, the NBA mandated heart scans for every player, and has since detected and prevented many issues. They could do the same with league-wide standardized soft tissue assessments.

We have the science, right now, to be incredibly smart in combining these three systems to make meaningful injury predictions. Even before then, Wagner says his team can assess an NFL roster and accurately predict 18 percent of that team’s injuries before they happen—something that was unthinkable just a few years ago, and that Wagner says is worth close to $12 million a year in wasted salaries. Every one of those cases is an opportunity to address the problem before it’s dire. And with more data, the 18 number inches up.

In effect, that would be like saying to Demarcus Cousins we’re worried about your ACL today.

I asked Wagner if he has a utopian vision of how the future might make all these things work.

“Absolutely,” he said. “If you can pair up loading of the games with individual injury history and current movement pattern, you can know a lot. The organization could come to a player and say ‘today there’s a 20 percent chance of ACL risk." And the player can decide I won’t play this week, but if the risk goes down, I’ll play. Or maybe they’ll decide it’s Game 7, I don’t care, I’ll play no matter what. In my utopian vision, it’s the player’s choice and the organization is working with the player to clearly explain those three different systems.”

There’s a big difference between football and basketball, Wagner explains. Basketball players tend to have a culture of playing the game a lot and working out very little, whereas football players—with a week off between games—work out a ton, and play the game very little.

One trick, in season, is to be like Michael Jordan. Basketball is about running and jumping. The “opposite” workout of that might be a typical baseball workout, with lots of rotational forces while standing on the ground, as used in throwing or hitting. Or, as Jordan found worked for him: swinging a golf club. NBA players can work hard on rotational forces in season, without taxing overstressed traditional basketball muscles. Conversely, Sparta has advised MLB players to do plyometrics—explosive running and jumping exercises—in season, because it’s a way to address those players’ weaknesses without overworking muscles tired from gameplay.

That is an opportunity for basketball to improve. While there’s all kinds of evidence NBA superstars play too many minutes, Wagner echoes what many sports scientists say—most NBA players are underworked in other ways: “They are just doing the wrong work. It’s not about resting players so much as shifting to more work, depending on the player, that they need. Some guys might need more minutes, others need more strength work others might need more massage, or sensory deprivation tanks to restore their neurological function. We have to be smarter about in-season preparation.”

It’s a chance for teams to distinguish themselves. “How cool would it be,” he asks, “if players started choosing teams based on their health stats?”

It will be lost on no one that Cousins is yet another player from last year’s Warriors with a major injury. Wagner recently talked to the Warriors’ embattled director of sports medicine, Rick Celebrini. “Rick,” says Wagner, “went into a culture of dysfunction.” This kind of thing is common in the NBA—whether or not teams hire smart people is only part of the question. The other trick is to support them in building a culture of injury prevention. Celebrini was the fourth person to run the Warriors’ injury prevention program in six years. The second was a close friend of Wagner’s, Lachlan Penfold. “He left just because players weren’t engaging in his recommendations,” says Wagner. “It was just too challenging for him to make a dent. You’ve got to have the support of everyone to really make changes.”

With the terrible injury history of the NBA’s best, we clearly need to really make changes. So the question is: what will it take to get the support of everyone?