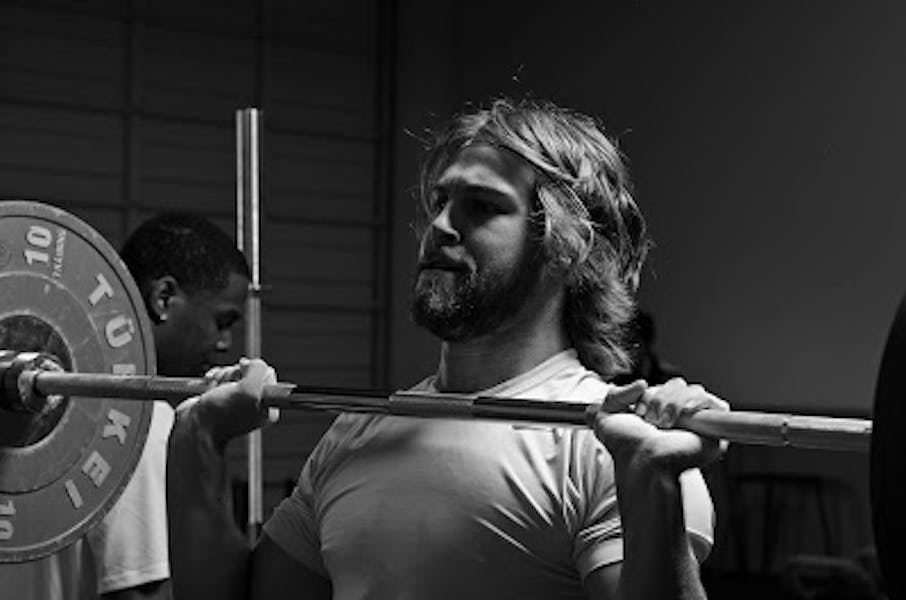 Athlete is from the Greek symbol, “one who competes for a prize”, which is rooted in two words:

Unfortunately when we are away from the actual sport, this definition is forgotten. Whether it is on the field, court, or track, it is easy to be confused that the prize is in the training; that the goal is a heavier lift or a greater number of repetitions in a certain time.

As a result, the the prize of weightlifters, a 1 repetition max (1 RM), was transferred to all athletes (see Sparta Point). Yet this "prize" was created from the data of weightlifters, for weightlifters. Yet we all need some prize in our training to stay motivated, so what should it be?

1 RM is for Weightlifters

One of the guiding principles of maximal strength training, and its goal of 1 RM improvement, is from the work of A.S. Prilepin, the Soviet weightlifting coach from 1975-1985. He developed dozens of medalists and world champions in this sport. His work was summarized as "Prilepin's table", popularized more recently by Louie Simmons and his development of elite powerlifters at Westisde Barbell.

The table was developed by monitoring barbell velocity, and provides rep schemes to ensure the greatest development of both speed and strength, qualities that dictate power. All of this data is fantastically objective, and the USSR, Westside, and similar university philosophies have had huge success in improving 1 RM.

BUT, that is not the "prize" if you are a football, baseball, soccer player....

The Real Prize is Efficiency

The true prize (athletic success) is best provided in a training environment by neuromuscular efficiency, how well you can solve problems in sport with the tools you have; your genetics, limb lengths, training history, previous injuries, etc. Modern studies have confirmed that the root of the neuromuscular system (brain) is “quieter”, or more efficient in trained individuals such as athletes (see Sparta Point). Injuries are also linked to the inability to relax the antagonists, the opposing muscle groups, as more at risk individuals seem to be just driving with brake on (see Sparta Point).

This improved efficiency should have 2 results that lead to the prize; lower injury rate and increased performance in your sport. We measure this efficiency on a force plate by diagnosing a movement signatureTM,the ground reaction force (GRF) profile used by an athlete as a neuromuscular solution to move more efficiently.

The Force Time curve on the right is a "tense" movement signatureTM. This solution is common in athletes with high maximum strength levels (big 1 RM), but lack the efficiency of using this initial stretch development (LOAD). We also see this signature in most athletes starting the off-season after a long break from physical activity and/or individuals that have a hard time psychologically relaxing during movement.

The Solution is Levels

The better solution for athletes pursuing 1 RM is density training, where the training prize is to do more work in the same amount of time. Another word used has been work capacity, the ability to tolerate a high workload and to recover sufficiently for the next workout or competition. We use density because the goal is not just work (distance or reps multiplied by the amount of Force), but the prize is more general. An athlete must run faster more consistently, jump further more often, and lift heavier for a greater total number of reps. In short; be more explosive, more often.

To progress this density and prepare an athlete for their sport, we use a level system like the USSR, with 2 major differences. The first difference is body-weight percentages rather than 1 RM (see Sparta Point ). Our athletes still move HEAVY weight but they are only progressed upon attainment of specific % of body-weight. The second difference is that when athletes achieve certain percentages of body weight, their rest time is decreased. An example is an athlete at the end of our level I hits 90% on a front squat for 3 sets of 3. This goal pushes them to level II for 3 sets of 8, and a rest interval is reduced by 30 seconds.

This system allows us to fit more sets into a given time block to build the volume, a critical need for schools limited by class schedule and NCAA limitations.

To be clear, heavy lifting has huge benefits to the neuromuscular system and must be included for us all. Yet the progressions and rationale of your strength development must address your ultimate prize, not how much ya bench.